What is Zen practice? 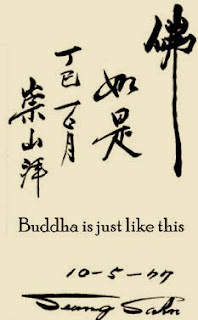 "Zen practice is about awakening to this very moment. There is no other function of Zen or Chan or Son Practice. We can learn liturgy. We can know how to chant well. We can eat a formal meal perfectly, yet none of this is the Zen that Sakyamuni Buddha taught. Zen is waking up to the present. Just this, just now, only this moment."

Army looks toward new ways to fight the pain 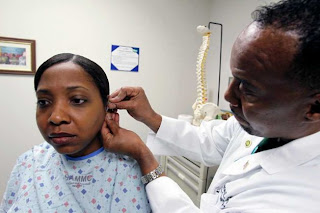 Soldiers are getting alternative medicine.

Today, she's among a growing legion of war veterans suffering from scleroderma, a painful and potentially fatal disease. Wright, 40, feels pain in her face, joints and toes. She's lost some of her hair, and her toenails fell off.

“It's to the point I want them to deaden the nerves in my face. But (the doctor) said if you do that you take a chance of developing muscle atrophy, Bell's palsy with the real bad facial droop, no muscle control,” she said. “I said I'm willing to take my chances. Just do something about it. It's just consumed me, and I'm miserable.”

Pain pills are part of the treatment, but in her case they don't last long, so orthopedic physician's assistant Duane Griffin last week performed an acupuncture treatment, injecting small gold needles into selected parts of her ear.

Her care is part of the Army's fledgling complementary alternative medicine program, which is testing new therapies, some of them unproven and one literally out of this world.

It's another option for GIs who have returned from combat with pain from a variety of wounds and illnesses, for whom the Army has spent billions on drugs that have resulted in complications, dependency, abuse and even accidental deaths and suicides.

Pain psychologist Lewis Sussman, who came to Brooke Army Medical Center in 2007 from Dartmouth's Hitchcock Medical Center, helps fight pain using hypnosis, biofeedback, relaxation therapy and SCENAR, a device that uses a small electric current. It was built to relieve pain for cosmonauts who cannot take medicine, which would contaminate recycled water on board spacecraft.

“I don't know if things have evolved since (1997), but in academia you were not seeing acupuncture very well accepted because there weren't the kinds of random, controlled, double-blind studies that you expect to see with more conventional medicine,” he said. “Some things don't lend themselves to random, controlled-trial, double-blind studies, and acupuncture's one of them.”

Qi gong, a form of Chinese meditation, is one of the alternative therapies adopted in the wake of an Army task force report. Instructor Lupe Gonzales recently held a demonstration, teaching a small group of soldiers and civilians deep breathing exercises to reduce stress.

“Picture this beautiful mountain with snow on top and it's pretty cold,” he said. “You're going to pull air all the way from that mountaintop...”

It sounds a little New Age, perhaps. But advocates say qi gong lowers blood pressure and blood sugar levels, and note that sessions can run from seven minutes to a half hour.

The Army's surgeon general, Lt. Gen. Eric Schoomaker, has become a powerful advocate for the alternative therapy movement. His Army Medical Command has launched an ambitious program to learn what alternative approaches work and make them a standard of care.

“What we're doing here is to open the aperture, as I say it, to a much wider range of modalities that can be applied to the management of both acute and chronic pain, and they're largely focused on the results of pretty careful studies,” Schoomaker said.

“In fact, the use of acupuncture for pain management is almost mainline. We're now using it in the battlefield, even in the special operations community and other places with much success.”

Sussman concedes that while mysteries remain, some of the new alternative therapies work. Col. Kevin Galloway, chief of staff for the Army's Pain Management Task Force, pointed to acupuncture as a safe, proven therapy.

“To ignore it would be the ultimate insanity for us,” he said. “We have patients with real experience with some of these modalities, things that have worked with no side effects, have gotten tremendous benefit from them, and we've had to ask ourselves the hard question of why aren't we able to offer them things that are very low risk and potentially very high yield?”

Wright is up for anything. A survivor of a suicide bomb blast in Baghdad's Green Zone, she now lives in Fort Sam Houston's Warrior Transition Battalion and no longer jogs, lifts weights or works.

“This is the first time I ever tried acupuncture because I used to laugh at it. I'd be looking on the TV with the Chinese with all those needles and the person looking like a porcupine,” she said. “I used to laugh at it, I did. And not now. Not now. Isn't that something?”

Posted by Gregory E. LeBlanc at 7:02 AM No comments: